I wasn't entirely sure where I was going to go with this week's theme. Last Friday, 8 March, was International Women's Day, and ever since I have been thinking what that means to me, Now...

I know it has meant many things over my 60 years on this planet, and probably a LOT of that was very reactive on my part.

I grew into my womanhood at an ideal time, at least I think so, BEcause a lot of the "heavy lifting" had been well-BEgun by women a decade or so BEfore me.

Although I was less interested in college than in Clown School when that was on my horizon, I find it hard to imagine BEing alive in a time when going to college was NOT a given!!

Upon reflection, I can see that the World I grew up in and the one I pretty much take for granted today are vastly different. However, I have been in it Present Tense throughout, so it requires a LOT of pause and reflect to SEE the arc of change.

I've returned to the medium of words to express my thoughtsandfeelings this week...

Who Is This Woman I Call Me?!

Is she the sadness that sometimes swallows her whole
Or the silly that makes her heart sing
MayBE she is a little of both
Yet I suspect there is more to her.

She is first herself
Her own constant companion
Encouraging, listening, and available
So that BEing herself is enough.

I BElieve she is adventurous
Yet wholly content where she is
She loves the Journey
And deLIGHTs in BEing home.

Somedays she is a bit of a whirler
Brain firing on so many cylinders at once
Ideas dancing like butterflies in the sun
And this is simply magical.

Other times she is quiet
Even a little intense
[though she does NOT like to BE called intense]
And her mind is diving deep, deeper.

She enJOYs laughter and creates her own fun
Which is a bit strange to consider
Having spent so much of her Life
Following others’ lead in that regard.

Her Life isn’t a tidy little package
Doesn’t fit into any sort of box or drawer
Yet it is enough all she’s been and done
Indeed, enough and so much more. 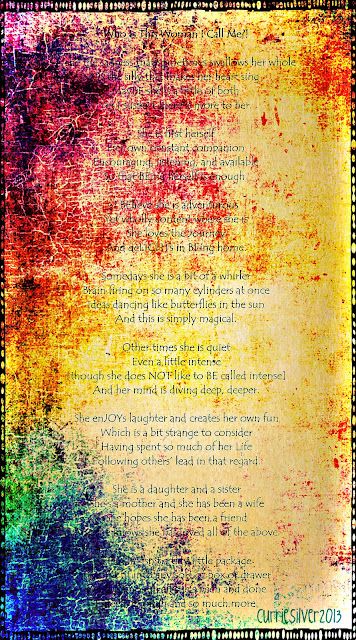 Posted by Currie Silver at 3:21 PM

Currie, that's such a lovely poem. It really says it all. I'm still pondering this one and I'm enjoying seeing what others come up with. I also really like the artwork you made to frame it. It matched the poem perfectly.

I think a life that doesn't fit into a package or drawer is the best life to have. I really like the verse 'she is her own constant companion' To be happy in your own skin so that being yourself is enough, very thought provoking Currie! lovely post.

Beautiful writing, and a lot to think about. I love the line 'Ideas dancing like butterflies in the sun'. Such an inspired idea ti complement the test with those bright happy colours, which show what a positive person you are.

Love the painting background, so colorful and gorgeous!

Being able to put yourself into words is a beautiful gift to have and you have it in bucket loads dear Currie! Such a heartfelt, heart-filling, poem, with a very wonderful backdrop. Thank you for sharing both :0) Mo x

what a beautiful piece, Currie!