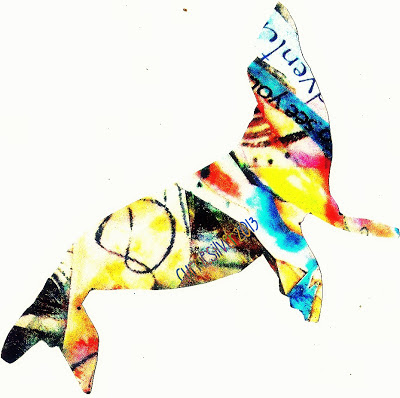 As much as l love the month of February, when it ends I am certain that it has only just BEgun.

Of course, this is ordinary Life.

It is less ordinary than others’ lives, those who have work to go to and children to raise and family commitments to meet and and and…

Keeping myself different, dissimilar, outside of, and apart from people or “normal” Life is a recipe for a tiny adventure into the Land of Disaster & Chaos.

I am NOT those things at all. I am just ME living My Life Now.

I’ve been working on some Pretty Big Deal For Me Stuff this week. This month, really. So in a sense it is nice to reach the 28th of February with a sense of completion.

In this Spirit of feeling good and happy, I am taking a page from the books of others I so admire and combining Artist’s Play Room #46 and Photo Art Friday 1 March 2013 into this one post.

The themes, inspirations, or if you like, challenges of both could NOT BE more different… Yet, for me, they are nearly one and the same.

You see, APR and PAF act as two sturdy bookends in my weeks.

They provide me with opportunities to learn and try and fail and laugh and make discoveries and wanttotearmyhairout [sometimes] and try again and see WhatHappensIf?! and, well, they just give me a container [or, really, a door to walk through, out, and BEyond] in which to live my Life one little breath at a time.

Though their theme, prompt, or challenge this week are BLORANGE [for Blue & Orange] and Vintage, despite the differences, they’ve intersected in some pretty darn cool ways.

At least for me. 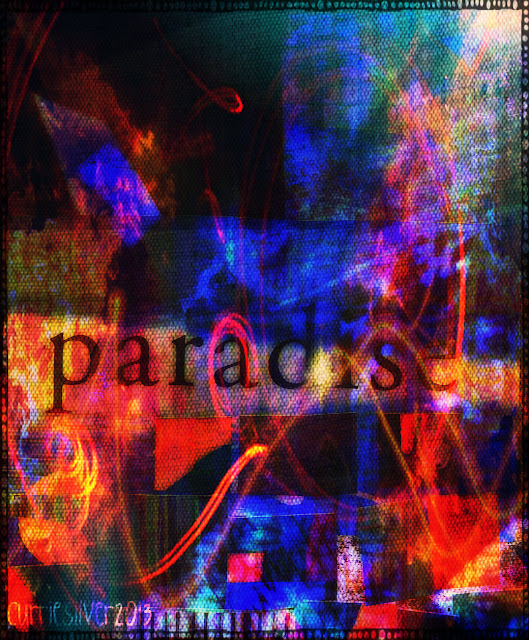 Paradise is an entirely digital collage.

Of course, it started out as all my collages DO with some sweet time of sifting papers and finding the ones that sang to me.

I then spent several deLIGHTfull and engaging hours scanning and composing on my scanner AND another one "painting" without gluing the paper to my substrate.

I spent a good long while digital fiddling in both Picasa and Pixlr Express, liking some of my results and BEing surprised by others. I had many moments of WOW!!! I DIDN’T KNOW THAT WORKED LIKE THAT!!??!!

What started as my intention to make an entirely digital painting, [or two, one blue and the other orange, mostly] unfolded with surprises and deLIGHTs too numerous to list.

I did also make two collages with some of those papers I’d sifted. And I did that first by photographing them and second by gluing them down and scanning them. It was/is quite an enJOYable process.

BElow are the photographed versions, Blue and Orange: 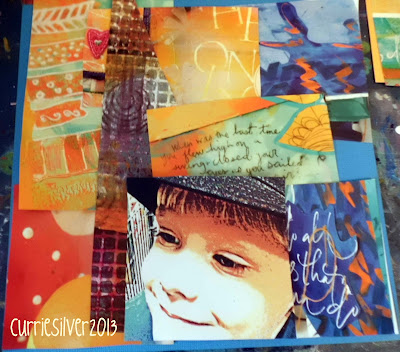 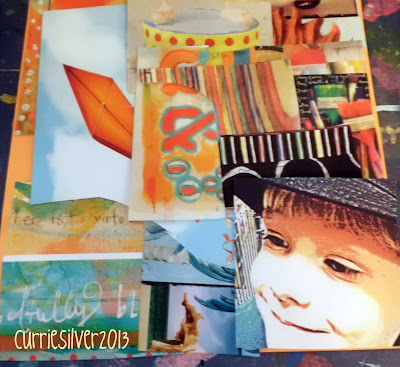 And BElow Here you can see the glued-down and scanned versions of Blue and Orange: 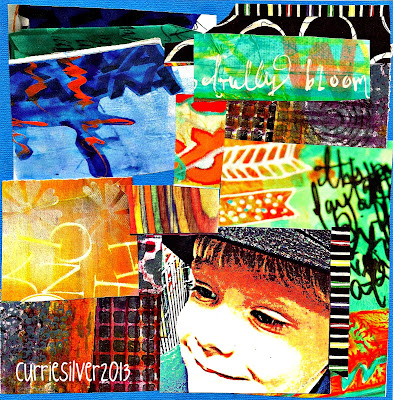 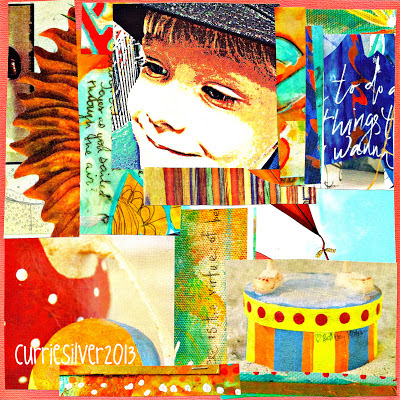 And so here’s the thing about Photo Art Friday… after I’d scanned and photographed and fiddled and played with these blues and oranges and whatever all spoke to me, I had a “something I THOUGHT would BE my singular BLORANGE offering” which turned out NOT to work as I’d thought it would, so I decided to further fiddle with it as something a little more like Vintage…

Take 1, a variation on the theme of BLORANGE… 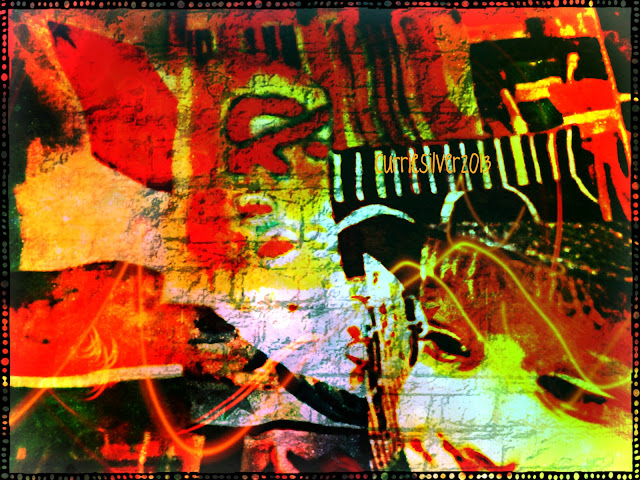 Which is totally almost ALL ORANGE and no real BL[ue]…

Turned to VINTAGE with a little help from Pixlr Editor and then Pixlr Express. I’m sharing both versions as I simply got too cross-eyed to pick just one. 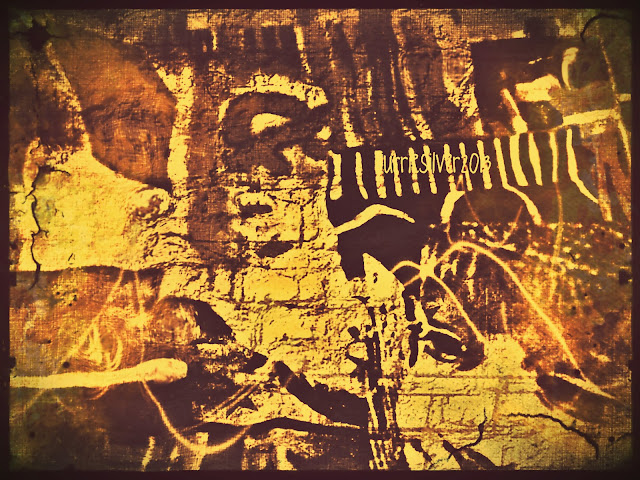 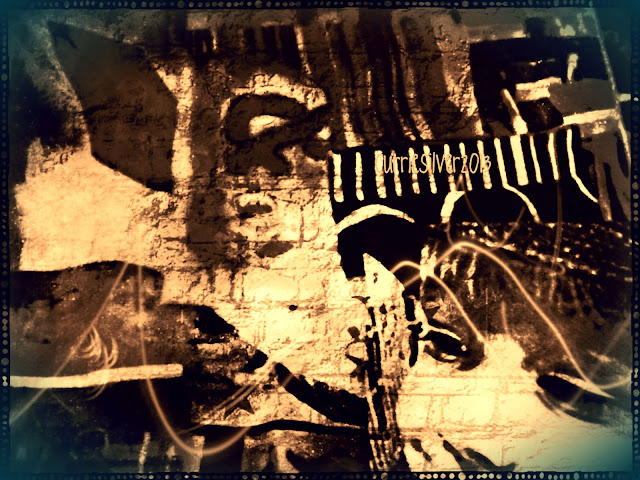 Amazing thing is, Pixlr Editor works exactly like what I was hoping Photoshop Elements 8 would DO, meaning it is intuitive and less affected by my bumbling and stumbling…

So there is my Journey, gently guided and encouraged by Artist’s Play Room and Photo Art Friday.

It’s been quite a day this week… such a lovely thing, er, two lovely things to keep me grounded when I start to “lift-off” and get lost in the clouds…

My goodness - such a lot of creativity going on here! Your blue/orange collages are each so appealing and wonderful to delve into. I like how you then played with just part of it in vintage....both to great result - I can see why you had a hard time choosing a fave....

What a lot of fabulous blorange Currie! You always amaze me at how talented you are at using your computer to generate such wonderful art. And not only that, you create it on your desk BEfore you RE-create it. I do enjoy these challenges that challenge me EVerytime, haha :0) Mo

Just loved your creative process here, and your explaining it, and all of your endeavors turned out spectacular!!

all that blogange is looking great. some terrific art there this week. thanks for participating currie.

this is a post simply full of wonderful... and love your vibrant digital collages... they are simply brimming with energy...xx

I really enjoyed looking at all your creations. My favorite is the one on the bottom. I like the way the blue in the corner highlights the eyes in your collage. And then the eyes lead me somewhere else, and so on. It also looks a little like it's underwater and the other items sort of shimmer in the light. Really intriguing!

Wow Currie - you never cease to amaze me. Love the last two with the vintage flavor, but Paradise is my absolute fav. Be proud!

A Garden of Threads said...

These turned out awesome. The challenges always make me step outside my comfort zone, which is a good thing.

What an amazing ride again this week! So much to read and see and learn. Thanks for the inspiration Currie. I especially love the blorange collages!

Wow - so much creativity! I love your collages - both the digital and "old-fashioned" (vintage?!) paper ones. Great PAF piece, too. I especially like the final version.

Every single one is amazing, and 'Paradise' has wonderful texture. I love them all, though the final version is perhaps a little frightening. It's always so surprising where experimentation takes us unexpectedly.
Your digital artwork really impresses me and makes me want to extend myself on my digitals even more. Love your blog, and glad to have found it through APR.

Hm, i don't know which one I prefer.
They are great in all stages.
Best whishws.
Mormor Norway

...a door to walk through, that is a fabulous thought Currie and is exactly how I think of PAF. thank you for another glimpse into your artistic thought process and the finished pieces? wonderful!

Your first Blorange is simply breathtaking ... it is hard to imagine that it is totally digital. I would say you have conguered the digital art process. Now, I have to say that the beautiful child's face in the rest of your art drew me in and no matter how you construed it, I loved that beautiful face. It seemed to speak of joy. You have taken us on a wonderfull journey of your growing talents and growth within ... You are that joy.

Andrea @ From the Sol

How much fun, all you experimenting! I love Paradise, and at the bottom my favorite there is your darkest "Vintage" photograph.

It is right and just to BE happy!

and funny, but this past week I have been thinking a lot about ordinary life versus the not so ordinary.

I used to BE or to think I am not an oridinary person until I got married and had kids. Then I noticed I am normal, borring, and nothing else but oridinary...

Yes, delicious seal, I like. Great textures and colors Greetings.

The last two are great as a magical play of light and shadows.

That's quite a lot of work you did in creating all those variations!

You certainly got wonderful variations with this photo!! The VINTAGE depth is great....it brought out some details that were hidden!

I always love your posts....they are so inspiring!

Have a great week!

You know what I love best about your work...Your total joy and exuberance in experimenting. These are really fun. I have no clue how you are scanning and fiddling with your scanner to come up with art pieces but they turned out great. I really like the last vintage pieces. Oh and Paradise was amazing and so vibrant.

Your spirit of peacefulness that your artwork evokes blesses me every week, Currie. Thank you!

I am always so fascinated by your creations and the explanations of your creative journey. And I agree with Ida . . . love the joy you express in your words and images.

I´m not suer waht it is really, but I like the look of the last one. :)

The Paradise collage is really nice! All your creations have vibrant and energizing colors. You probably know this, but blue and orange work well together because they are complementary colors on the color wheel, opposite to each other (contrast of cool/warm colors). I learned this in design school. So interesting! Thanks for sharing :)

Thank you for taking for a walk through your process. As you play we learn. Continue forward and may your MARCH BE fantastic. xox teri

What a wonderfully joyful process you present here, and with such captivating results. I love the way the blue comes back into the final edit, but vintage apart, the 'Paradise' is absolutely stunning!

Wonderfully full of creativity Currie, i love the blue and orange...the colours associated with balanced creation...gorgeous works of art...enjoy the new month ahead :)

Oh my goodness...I love your artwork! I'm so glad I found your site. Thank you for stopping by mine and tuning me into the fact that I can use Pixlr Express on my pc. I had no idea and I'll be using it a lot more now. Take care and have a great weekend! :)

I love your images...Especially the collages. I just turned 62 and I feel like a young at heart lady discovering what she is capable of creating.. Like you, learning and exploring. Life has it ups and downs and I realize that I feel best being creative...

Love your blorange collage. It's so dramatic. You collage work is wonderful.

What lovely work and effects...isn't it amazing how much you can learn when you just play around and see "what if"? I'm always amazed when I do that. Your results are beautiful - thank you for sharing, Currie!

Totally awesome images -- I love the last photo image group - it is amazing all the things you can do and I am learning from you..
Hugs

Wow, I love the colours in your blorange piece. It's amazing how much things change when you digitally play with them, they all look great in their own way, very clever.
Von.

Wow...these are great. I play with Pixlr Editor too.

Thanks for dropping by my blog and for your kind words.

Apologies for my late visit Currie but I've made it at last. I'm so glad I made it because your challenge entries fantastic!
Your 'Blorange' entry Paradise nearly knocked me off my chair its so vibrant! I LOVE IT!
You are so clever and must have the patience of a saint because when I tweak and fiddle with my photos...I can be driven to near distraction ;(
Have a great week and I'll try to visit earlier ~ promise :D

I like the bottom one the most. Have you had the exhibit yet as I told you too? You really have some awsome art! Take care !