It's been awhile... how interesting how despite the past week having taken a couple of unexpected turns, I come here today feeling happy just to share my past week's Daily Paper Prompt Responses... 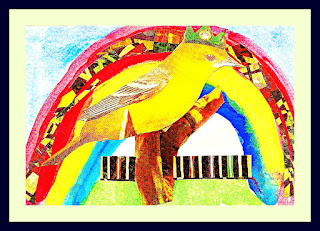 #13 Music
My favourite song EVER is Somewhere Over the Rainbow. This little collage in a painting speaks to these lyrics:
Birds fly over the rainbow...Why then oh why can't I? 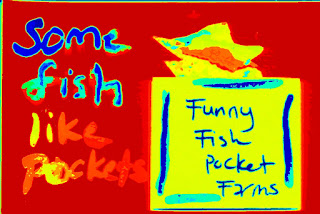 #14 Pockets
I was in a strange mood that night. NOT bad, only strange...
I was thinking about Kangaroos and pockets then saw all my funny fish from a series I've been into the past few months and chose them to BE my Ah-HA Pocket inspirations!! 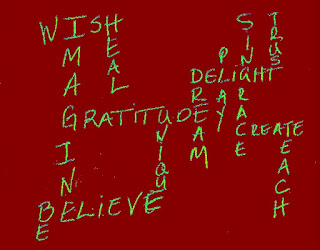 #15 Words
These are some of my favourite words and I had fun putting them together in a quasi crossword Scrabble-ish format.
I love that I made an OOPS!! with Sing and Grace but then I remembered that at camp we used to sing Grace BEfore our meals.
Loved that memory!!! 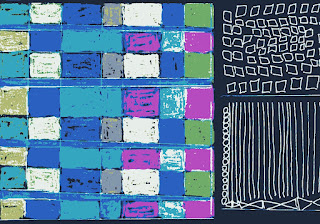 # 16 Patterns
It was a little different for me, this prompt. I was in a difficult place, feeling HUGE feelings like waves in a storm. I thought about the ways I've learned to quiet myself a little, to bring myself in off those ledges I find Life sometimes BEing. I think the part where I did them to the time when I scanned them showed me that DOing them really HAD settled me down to where I could actually digest a bit of the WAVINESS pulling me under that day. 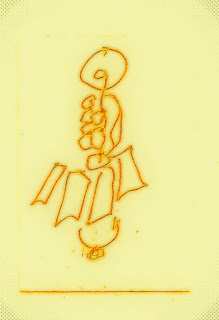 # 17 Chandelier
I have only recently developed a consciousness about how I say what I say [and have long said] about How I Draw.
I thought the prompt, chandelier, a bit silly, which then made me laugh since here in the Wee Cottage there are two light fixtures that would qualify, yet neither one really works. Anyhow, the one that worked twice but NOT BEtween the 2 times or since the second time is the one I drew.
[I know, who cares, Currie?! but I am learning to BE brief and this is why]
I drew it mostly without "trying" and even Now I can see I drew it pretty much as I see it.
I realised that one of Picasso's quotes speaks to that. That how he drew things was NOT how they looked but how he SAW them.
When I scanned all of these DPP's in this morning and and later played with them, I also was reminded that just a week ago I was still totally intimidated by Photoshop Elements 8, a program I received for Christmas in 2009, yet only just last week, after diving headlong into an eCourse was/am I FINALLY learning to navigate in it a wee bit.
So, for me, playing with all these scans in Picasa was like turning on the faucet after a week of pumping water... so easy, so fun, so daring to try things and just see what happened.
Anyhow, this is a very tiny drawing and way TOO many words about it. 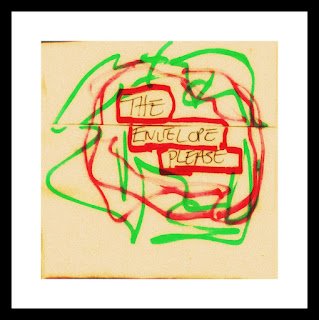 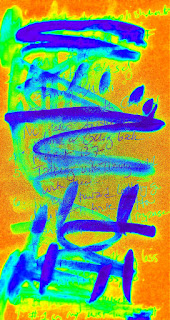 #18 Accomplishments
I enJOYed making this sort of like an Oscar envelope with a piece of printer paper I'd cut and had a good bit of left over. I also enJOYed writing my list and then painting over it then making it even MORE invisible in Picasa!! 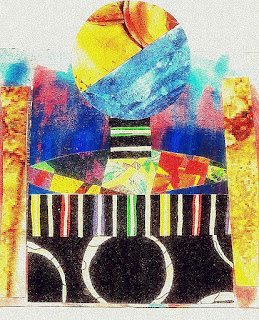 #19 Mail Art
Okay, this may or may NOT turn into a thing that I mail, but making it moved me to send off two letters I wrote to two people I haven't written to in a Very Long Time. I sort of liked the serendipity of that, y'know?! 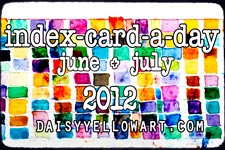 Posted by Currie Silver at 4:16 PM

Love these responses. I am loving them as well. A follow on from Icad. I am loving the creativity burst in general at the moment. So many ideas bursting, but better that than the alternative. :)