Go Out Into the World and DO Good Until...

I try NOT to BE too literal, but somedays my birdbrain takes me on magic carpet rides where colouring outside the lines is wondrously essential.

This week I was making a photo collage for my dad's 87th birthday. I suppose I want him to like it, mayBE a little too much.

I also want to dazzle him. I'd done a photo collage of his dog after I visited him in June of 2011. That really deLIGHTed him.

After a lot of trying this and that and getting cross-eyed in PSE8, I came back to the comfort zone of Picasa. I'd taken pictures of pictures of him DOing this reading thing he does after school. I made a photo collage with them, but... Somehow it wasn't quite what I was going for. I finally printed it out on white cardstock and while it was okay, I soon found myself cutting and going to the "digital fiddling" that involves 2 hands, glue sticks, and a paper cutter.

Ultimately I "made" this into a collage and then felt like it needed something, a quote mayBE?! [I needed to keep my writing to a minimum... don't ask, apparently he doesn't like to read a lot of words ;~D]

I went looking for a quote about Making A Difference. BEcause, this is the essence of my dad. I found this:

“Go out into the world and do good until there is too much good in the world.”Larry H. Miller - Businessman, Philanthropist


So I made it into a word art thing in Word and cut and pasted it round and through the collage. I was pretty happy. And off I sent it to him yesterday... As I got to thinking about this week's Photo Art Friday, Bonnie's suggestion is
showcase an image that features distinct line(s)

and to that end, this is what I ended up DOing... 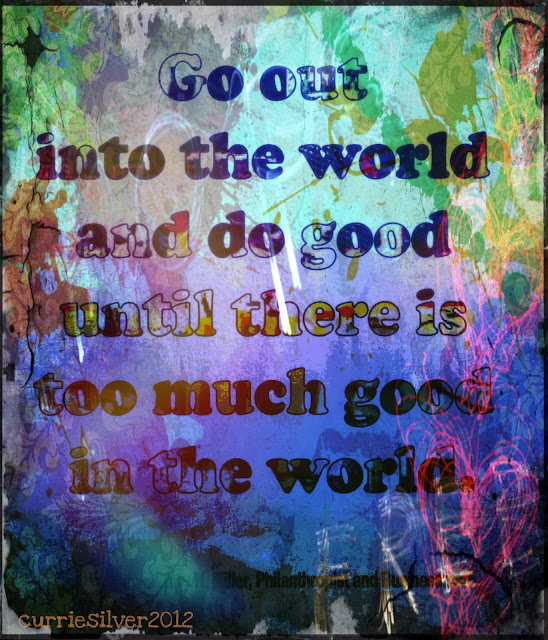 The "distinct line[s]" BEing Miller's quote. MayBE this was on Bonnie's radar, too, with the suggestion. I suspect so!!

Anyhoozle, this is what I've got. The package should also BE delivered to him Friday, so I'm kind of having a reverberating Photo Art Friday!!!

As for HOW I did this... Really, I just played. In Picasa, in Picnik, in PSE8, back in Word, even, and then scanning the word art to make it a jpg. Then, when I was done adding and fiddling with a couple of pdpa textures in PSE8, I went to Pixlr and had at it with anything that caught my eyes. It's been therapeutic, in many ways...

Thanks for your patience with this post. Guessing I had to "use my words" eventually!!!

Posted by Currie Silver at 3:47 PM

I like your end results here Currie :) I'm sure he'll appreciate your creative efforts and thoughtfulness, I hope so!

This is such a great collage of and for your father. It reminds me that I should be volunteering at our elementary school in their reading program. And your art is so colorful, so meaningful!

What an amazing process and lovely result, Currie! Isn't it exciting to undertake a project and see where it evolves?!

Currie, the collage for your dad is wonderful! he seems like such an amazing men!!!
And I really love the quote!

Love the result of all of your 'fiddling". I also really love the shots of your dad, and the lovely tribute that you have done for him I know that he is going to really love it!

What a wonderful gift to send your dad. He sounds like a delightful person.

I am completely loving your Photo art Friday piece, I can see how it was therapeutic . . . just so fun!

what a thought-filled project. I find the 'digital fiddling' the hardest part. Hope your father appreciates the recognition of his own admirable efforts to spread goodness.

Gardening in a Sandbox said...

You Dad should be happy that you made the collage with love for him. The photo art one is very colorful and graphic. So cool. Valerie

What a neat collage you put together for your dad and the quote is perfect! I'll bet he will love it!
I really, really like your "psychedelic" photo art with the quote too! :)

Such a beautiful man with a beautiful heart. You are blessed to have such a father as is he to have you for his daughter. Your talent always exceeds your own expectations and it is because it come from your heart. I loved this post, Currie.

What a thoughtful and creative gift!

isn't it funny how even as adults we try so very hard to make the perfect art for our parents . . . i know i did it when i was a kid and i do it now too.
i think your dad sounds like a good man who wants to make a difference where he can and this quote is perfect for the collage that you made him.

i love what you did with the PAF piece. the purples make my heart sing and the quote is worth remembering.

So thoughtful. So creative and great!

I love where your thoughts take you Currie. The journey to this piece is so interesting to me and the result...amazing. I am having problems leaving a comment today so hope you don't get multiple variations of this!

Happy Birthday to your dad. I'm sure he will love the photo collage. You did a great job on it!

What a wonderful story! And such beautiful 'line-art' at the end... :)

It is lovely that you made your Dad such a special birthday present... he will love it. It really is lovely. (My Dad turned 91 last week)
I like the sentiment and the art of your line work ...you have line words and line textures!!:))

Sweet collage! My dad just turned 92! Happy birthday to your dad, too! :)

Currie, since I have joined Pixel Dust Photo Art, I just see you blossoming each week. This is so full of heart and beautiful color. So very creative!

That is an amazing homage to your dad.. sure he adored it... and the quote is amazing... xx

Your result und your text I like very much!
LG joelsuma